APL Happy Tales – Every Tail has a Tale!

As an independent, nonprofit humane agency which receives no government funding, and being reliant on service fees and donations, we are especially pleased and touched when our friends include a note about their experiences with an adopted APL animal and the wonderful life that guardianship has brought to both human and animal alike! The Cleveland APL is where happily ever after begins; these stories share what happens to shelter pets and their new owners after they leave our facility. 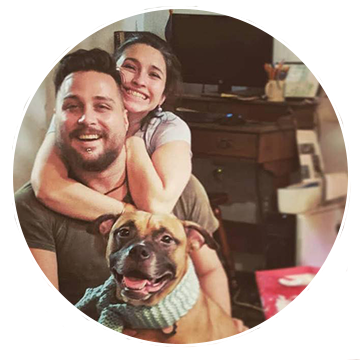 A little over a year ago we adopted a very sweet, very cuddly boy. It was absolutely love at first sight – every time we passed his pen, he followed us as far as he could with the most adoring eyes we had ever seen. We met a few other wonderful animals but kept coming back to him, and when we brought him into the meeting room he hugged me, it was all over. His name was David Bowie, he was just getting over kennel cough, and it was his first day on the adoption floor when we met him.

We named him Spaghetti, and he immediately became an integral part of our little family. Spaghetti was 50 pounds when we first got him and could barely walk up the stairs without shaking. Now, he’s a healthy 74 pounds of solid muscle and loves hiking, running, and above all, cuddling.

Both my husband and I have had dogs our whole lives, but we’ve never had such a wonderful best friend in any other animal. We think he’s a Staffie mix, and even the most terrified-of-dogs people have fallen head over heels for him. He’s insanely gentle and playful, deeply protective of me and his little sister Merlin, and looks at everyone with so much love that it’s brought numerous people to tears.

I’ve attached more pictures of him so you can see him thriving! I wanted to write and let you know that he’s doing an amazing job as designated “Best Boy”, that he’s healthy and happy, and that he is so, so loved. Thank you for taking care of him for us before we came to get him. Benjamin’s Happily Ever After

I adopted Benjamin (b-b-b-Benny) a year ago today. He was 9 then so he had his own ideas how things should be done. Or maybe he thinks I am a little slow because he immediately notifies me when his food dish is empty and always shows me where the food is kept. He has settled in with my other cat and they both enjoy watching out for squirrels, chipmunks, turkeys and deer but all outdoor activities involve a leash and personal supervision. Well fed. Safe. Content.

Olly’s Happily Ever After Within 30 minutes of arriving home from the APL, Miami Vice and I were greeting my son, who was getting off the bus from school. He was over-the-moon excited to see me holding the leash as he sprinted toward his new forever-friend. Within minutes, the two of them were rolling around in the grass but posed long enough for me to snap a picture.

It didn’t take long for him Friday afternoon to figure out that Miami Vice came preprogrammed with tricks – “sit”, “paw”, “jump”, and “roll over” were discovered pretty quickly as Miami did a show for the school kids.

The next morning, we took him to PetSmart for a grooming session, for which he was understandably anxious. An oatmeal bath and salon cut later, he was sporting his new style. We left for our cottage in Chautauqua on Saturday, where Miami Vice quickly made new friends with other dogs – a Shih Tzu/Terrier mix, and a Maltese – and spent an evening in laps sitting around a campfire. He will get to pal around with them on a regular basis going forward since they are all in the neighborhood.

Miami Vice has been renamed “Olly” by my son and is getting more used to his new home and creature comforts each day. We still have a bit of housebreaking to do, along with an introduction to our resident cat, “Uma”, but patience has its rewards, so we are proceeding slowly and consistently.

Thank you, APL, for all you do every day to rescue animals and give them homes where they can be loved and appreciated!

Calypso’s Happily Ever After

I wanted to share Calypso’s “Happy Tale”. Calypso came from the Cleveland APL in June 2014 and her original name was Pippy. She was one of 13 puppies brought in with her Momma and was 8 weeks old when we took her home.

Calypso has been a certified therapy and crisis dog since August 2016 and has recently joined her second Therapy Dog team, K9 Caring Angels. She holds her Canine Good Citizen certification, as well as two additional certifications, the CGC Urban and CGC Community titles. Calypso has also completed the Novice Therapy Dog (THDN) title required number of therapy visits and we are in the process of applying for the AKC Title. She visits nursing homes, fire stations, police stations, and funeral homes to offer comfort to people.

At home, Calypso has a dog sister named Pandora who is also her doppledog despite being a few years younger, and a kitten sister named Nyx. Her two human brothers adore Calypso and she is amazingly patient with their toddler shenanigans. She is a very intuitive girl and runs to the kids when they’re hurt or upset. Her instincts also lend themselves to making Calypso a wonderful crisis dog as she often finds the people in need of her attention the most and lays at their feet, asking for belly rubs.

We are so grateful to the Cleveland APL for helping us find our beloved fur baby and we look forward to enjoying MANY more years with her.

Send it to us along with a photo of your furry friend!